Dude, Scotty, Guru and all of the DGC family, I hope this posting finds everyone rockin’ some fire!  I caught the post by Saint Skinny a few days ago, regarding companion plants that repel bugs.  I loved it.  It’s refreshing to see others waking up to making their grows lean toward Mother Nature’s method.

The subject of companion planting is VERY important, especially if you are growing girls outdoors.  This is the single largest line item that I believe is most notably missing in the business plans of commercial cannabis growers.  IMHO, this could be a secondary revenue channel particularly for large scale outdoor producers.

Here’s my disclaimer – I only began to figure this subject out in my gardens in the spring of 2015.  I am not, by any measure, an expert when it comes to this subject.  I’m just a garden nerd who is very passionate about organic food and medicine production.  I read and research, often ad nauseam, these types of subjects and thereafter apply the knowledge gained and hone that knowledge through practice.  Correct me if I’m wrong Scotty.  I think you call this behavior “smashing the stoner stereotype”.

Gardeners that embark on the organic journey often find themselves wondering, “Is it okay to plant this in my flower bed, or plant some of these next to some of those?  Will one or more of the plants interfere or compete with another?  Will one plant provide benefits to the adjacent plants?”  Just receiving simple one word answers doesn’t really teach us very much.  In this post, I’ll delve into some of the why’s.  I’ll attempt to explain some of the basic science behind companion planting, and the conundrum between plant companions that repel pests and planting those that attract beneficial insects.

If you’ve been reading my posts you’ve noticed a theme throughout.  Balance.  Mother Nature is spectacular in creating graceful balance and majestic beauty in the gardens she attends.  How does she consistently do it is the question.  Growing two or more different plants in the same garden or container raises a few concerns.  We need to consider a few things.  Chief among them are:  symbiotic nitrogen fixation, mutual climate co-operation, trap cropping, biochemical pest suppression, the attraction of beneficial insects and biodiversity.  Holy seed starts Batman!  Let’s begin with how these work individually. Our girls cannot survive without nitrogen.  We all know that.  Unfortunately, they can’t just breath nitrogen gas which is abundant in air.  Instead, microbiological organisms use the ammonia form of nitrogen to manufacture the proteins and other nitrogen-containing nutrients needed to survive.  So, what plants can we use to get this task done?  It’s our cover crop plants.  Peas, beans and other legumes fix atmospheric nitrogen using small growths on their roots called nodules.  Those microbes, and the bacteria in your Recharge, then act as the plant nitrogen broker.  Your girls ask the microbes for N, the microbes go get it from the nodules and bring it back for the plant in exchange for some sugar love.  Through this symbiotic practice of nitrogen fixation, you will spend less on nitrogen fertilizer.

Mutual climate co-operation refers to planting crops that, when they become full size, complement the needs of plants growing around them.  A good example of this is planting tall, sun-loving plants like cannabis, alongside short, shade-tolerant plants that will lend a helping hand to the cannabis.  These combinations will help both plant types produce better yields, and provide more pest control benefits overall.  A superior example are Marigolds.  Marigold is a sun lover but will enjoy the shade as they get older.  Dappled sunlight will extend your Marigold’s flowering cycle.  The scent of those flowers is what keeps bugs away.  A little more on Marigolds later.

Trap cropping refers to the planting of a specific plant.  It’s a decoy plant.  The goal is to attract pests away from your girls.  What I call ‘Double Trap’ crops, are those that attract bugs away, plus prevent those bugs from reproducing.  For example, Southern Giant Curled Mustard, when planted around a perimeter, makes for effective trap crop in controlling pierce-sucking insects that feed on the leaves.  These insects generally leave blotches and holes in leaves.  Sound familiar?  The mustard plant gets male insects to release pheromones which attract other like kind bugs.  In addition this mustard produces a type of enzyme called homing endonuclease, that can render pierce suckers sterile.

Some plants exude chemicals that can protect neighboring plants.  For example, marigolds release thiopene, an aerial pest suppression that repels many insects and nematodes.  Nasturtiums been shown to have larvacidal effects on leafminers.  In addition, some plants emit pheromones that confuse male insects, causing them not to mate.

Another form of biochemical suppression is a phenomenon called allelopathy.  Allelopathy is the release of chemicals from the root system to discourage insects.  Voodoo Lily can produce allelopathic chemicals that deter fungus gnats.  These chemicals can have a positive or negative influence on surrounding plants.  Those that have a negative influence are an important part of another plants’ defense, reproduction and growth systems.

Planting neighboring plants to attract good bugs is traced all the way back to ancient Egypt.  This strategy is used when the main plant lacks the ability to attract the good guys on its own.  To determine what type of beneficial insects you want to attract, get an idea of what pest insects you are likely to encounter.  My personal favorite to buy, attract and keep around is the green lacewing.  The lacewing larvae resembles an alligator and they attack and eat everything you want them to.  There is a long list of good predators and an equally long list of plants they are attracted to.  I promise you’ll always find fern yarrow, dill and coriander, a.k.a. cilantro planted around my garden along with a multitude of other herbs.  I’ll give you a list to work from at the end.  I mentioned balance above.  There is a subtle balance between the number of companions that are repellants and those that are beneficial attractants.  This leads us right into biodiversity.

Many insects and disease organisms prefer specific plant species.  For example, horn worms love tomatoes so much so, they are commonly called tomato worms.  Cabbage loopers love to chow down on not only cabbage, but broccoli, Brussels sprouts, cauliflower, collards, and kale.  Now think about how the hornworm views a monocrop field of tomatoes, or looper moths see a monocropping of any of the vegies listed.  It’s an all you can eat buffet with 100% of your absolute favorite foods.  It is imperative to mix up not only your crop types, but also your repellants and attractors.  You reduce the likelihood of a massive infestation by creating a balance of plants that will keep the bad guys away and keep the good guys around.

Ok Phud, I get it.  Please give a specific example that I can use tomorrow.  Fair enough.  I would suggest planting 1 marigold and 1 herb from the list which targets spider mites that is a repellant and you like to eat it, per cannabis plant, along with at least 4 attractants.  As an example, I enjoy eating coriander (cilantro), thyme, fennel and dill which are both repellants and attractants.  Then I might mix in marigolds, tansy & chrysanthemums here and there around the garden.  See the lists below.

What about Hydro growers?

When growing hydroponically each plant tends to have its own container, unlike plants grown in a raised bed of soil.  In this case, you might wonder if companion planting is relevant. The answer is yes.  For instance, if one plant’s roots are putting out allelochemicals, these chemicals are likely to be getting into the recirculation tank, where they will later be exposed to other plants feeding from that same tank.  Keep this in mind if you are recirculating your water.  There are many other influences from nearby plants besides allelopathy.  Is your grow room completely free of insects?  Even though you may be growing in a reasonably closed environment, you find yourself dealing with insects, right?  Popping any combination of companions in pots or holes next to your girls is only going to help.  Try a Venus fly trap, they ingest any insect.

Are there plants that simply don’t go together.  Yes Sir!  There are some plants that won’t get along no matter how hard you try.  If you’re growing legumes as a cover crop, planting onions or garlic to keep the vampires away ain’t going to get er done.  You’ll have a rooting conflict on your hands and everyone suffers for it.  The list of plants to avoid when growing cannabis is virtually nonexistent.  I have no doubt the government has one but those f#%*#ers aren’t going to publish it.  This leaves it up to us.  Luckily, generally speaking, the list of non-companions to any one single plant is rather short.  The key to this will be to learn more about plants that are allelopathic and apply that knowledge to avoid creating bad garden marriages.

Knowing what plants are good neighbors is important, and the practice of using companions is beneficial.  Diversity and balance is a great way to ensure your garden stays healthy without doing too much work or using too many pesticides.  Growing organic pharmacological grade girls is a bit of a science.  Understanding how one plant affects another can only serve to help you on this path.  You will find much greater success when you continue to learn and take these things into consideration.

Note.  Predatory mites are attracted to plants that are producing herbivore induced odor.  Plants only produce this odor through systemic immune response when they are under attack from spider mites. 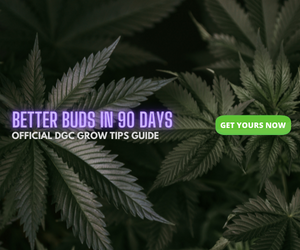